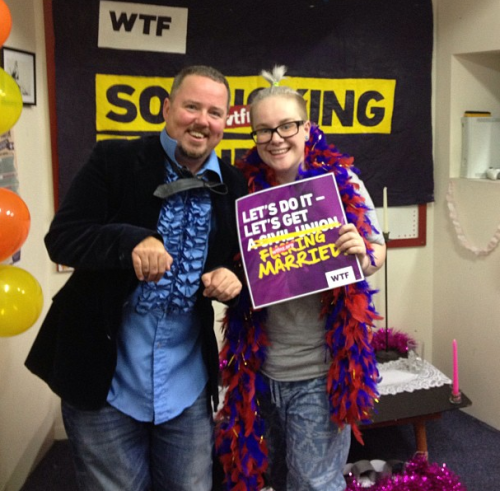 Tommy Hamilton and Aych McArdle at the Marriageathon

Marriage equality for the rainbow community was celebrated on K’ Road last week with a “marriageathon” hosted by a local youth group.

Rainbow Youth board member Aych McArdle said it was about commemorating the historic passage of the legislation.

“We were so excited to see Louisa Wall’s marriage equality amendment bill pass through parliament a few weeks ago, and we thought we’d have a celebration,” they said at the event.

“We’ve got cupcakes and tinsel and glitter, and we’re just having some fun with it.”

People were able to ‘marry’ whoever or whatever they wanted as part of the marriageathon, and dozens took advantage of the opportunity to tie the knot with friends or partners.

Rachel and Alex got married after walking in off the street, and agreed it was a good way to celebrate marriage equality.

“We were together for four years,” said Rachel.  “We’re just friends now, but we still have a deep bond and we love each other very much, so we were like this is cute!”

“Exactly,” said Alex.  It was a nice thing to do spontaneously, yeah, to celebrate the special kind of love we have.”

Rainbow Youth Executive Director Thomas Hamilton officiated as ‘celebrant’ at the event, and said the event made a statement about the inclusivity of marriage.

“This is a message about what we can do to make marriage even more inclusive,” said Mr Hamilton.  “What is the next phase of equality when it comes to relationships and marriage?”

Mr Hamilton said that while same-sex marriage is an important step, further steps should also be taken to ensure marriage equality for all New Zealanders.

“How can we make it that it’s not just a duality or a binary?  We’ve gone beyond the binary, but there are these other things,” he said.

“What is a relationship?  In regard to the state it’s two people who are getting married together, but what happens if you’re three people?”

Mr Hamilton said the marriageathon was hosted as part of First Thursdays, an event which celebrates the K’ Road community on the first Thursday of each month.

“We wanted to celebrate our human rights victory in a fun way that will engage young people and engage with our community on K’ Road,” he said.

Aych McArdle said it also made a statement that marriage equality is here to stay.